Never Leave a Man Behind

By admin August 8, 2018 Uncategorized No Comments
0 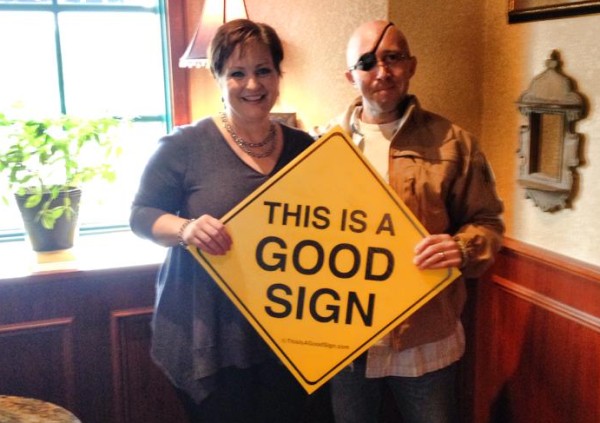 Eight years ago my husband, Derrick, got his brains blown out in Baghdad, Iraq. Trained as an Army Ranger, he went from being a fit, focused, and capable protector of US diplomats, to a fragile and comatose invalid with his mouth agape and his life hanging by a thread.

I was notified and kept up to date by his employer, who made plans to send me to Landstuhl, Germany to meet Derrick if he could be stabilized enough to evacuate from the field hospital in Iraq. Needless to say, our lives changed forever that day in April of 2007. He survived, I flew to Germany to be at his bedside, and our TBI journey together officially began.

I will skip all of the gory medical details—and there are many—in order to tell you a different part of this story, because it’s pretty amazing. You see, once I called and told a few close friends what I knew about Derrick’s condition, there was launched an immediate and constant salvo of every kind of aid you can imagine as we began our battle with TBI. One friend organized meals that were delivered each day, several women volunteered to become surrogate mothers to my children, a group of ROTC students moved furniture back into the house we had just put on the market the day before, a rescue ranch offered to take our dog in while I went overseas, folks prayed, mowed my grass, washed our laundry, sent my kids to summer camp, and baked me a birthday cake, among many, many other things. And that was just in the beginning.

Derrick’s former West Point classmates, our employers, and our church and school friends organized work crews and were a constant source of comfort. In fact, there was so much support that I was able to focus solely on caring for Derrick. I stayed in Germany for a few weeks, with representatives of Derrick’s company taking care of any need I had. The only thing I had to do was take an occasional shower, brush my teeth, and sleep. The rest of the time I was icing him down, fluffing his pillow, invoking God and guardian angels, giving him a bath, staring at and obsessing over the beeping machines, giving him a shave, reading to him, or lying down next to him.

Once he flew back to the states, the support continued and I was able to stay with Derrick in ICU every day, all day. Then, when inpatient rehab finally came, I again had the luxury of being able to advocate for him all day, each day. I had to leave my job indefinitely, not knowing if I would ever be able to go back, but my colleagues still offered their care and support and spearheaded a campaign to help make necessary modifications to our house so Derrick could eventually come home to a safe place.

I’ve been telling this story for several paragraphs now, and I’m sure you get the idea. Through all of it—the ICU, inpatient rehab, outpatient rehab, day programs, miscellaneous therapy experiments, and until this very day–we still have folks (some of whom I have never met) pulling for us. This type of story is not unique, but it is unusual and extraordinary.

No one can experience that kind of intervention and remain unchanged. For years, we have searched for a way to pay it back, so that the army of good people who gave so much of themselves would know how much we appreciate what they have done. We finally figured it out last year, but more on that later…

Meanwhile, like most families living with TBI, we carry on and experiment with any and everything that may help those synapses and neurons communicate. The running joke in our family is that everything is therapy, and Derrick (mostly) happily goes along with our suggestions and still maintains his adventurous spirit. We got him to start writing, even though he struggles with the ability to read. The writing eventually developed into his Facebook blog (Small Victories), where he celebrates life and accomplishment, no matter how insignificant it may seem to the casual observer. Another one of those adventures was taking pottery class. As it turns out, he absolutely loves it. It helps him calm his tremors and focus his mind, and he doesn’t have to compare his new skill to his former, pre-injured self. No expectation, except to enjoy the act of creation and sharing. Freedom…

Now, back to paying it all back, which I finally understand can’t actually be done. It’s just too much. That being said, instead of feeling defeated I know that we CAN pass on the legacy of comfort and support we received to someone else. So together, with an awesome bunch of people, we formed the Small Victories Foundation. SVF recognizes several basic things: 1. Eventually for folks with TBI, the therapy ends. Insurance runs out, the patient is declared at maximum medical improvement, and life goes on whether or not the patient is ready or able to participate in the “real” world. 2. No matter what physical or cognitive state a person is in, when he/she can experience learning something new, happiness results, and 3. Music, art, and movement are good for the soul. Understanding and believing these things, together with observing Derrick’s writing and pottery achievements, we were led to create an organization aimed solely at providing arts experiences for TBI survivors. It’s a small but definite victory to be able to help in this way.

After a year, we are now a 501(c)(3) non-profit organization, and we have about 20 clients in the Austin metro area learning all sorts of different cool things: piano, pottery, steel drums, hand drumming, music appreciation, drawing, pottery, ballet, guitar…the list goes on. The best part is that our clients don’t really have to please anyone but themselves. The instructors we have partnered with are patient, loving, out-of-the-box thinkers who are really great at improvising solutions for the different learning styles and abilities they encounter. The physicians and organizations who have referred clients to us appreciate the fact that once a patient is discharged, they need to use the momentum created through their formal rehabilitation to continue to improve, refine, and create their own new “normal”. All of these perspectives come together in an alliance to combat in our small way the potential isolation and depression that can come from a life changing TBI. We don’t want anyone left behind.

Reprinted from the summer issue of The Texas Brain Injury Alliance newsletter. To read the complete issue, visit http://www.texasbia.org/images/2015-Summer-Newsletter.pdf